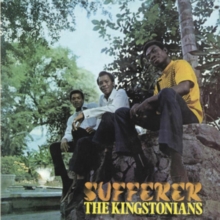 During the late 1960s and early 1970s, the peppered Jamaica’s singles charts on a regular basis, with their recordings for producer Derrick Harriott proving particularly successful. Their popularity prompted the producer to release what proved to be the vocal trio's only album, ‘Sufferer’, which collected a dozen of their works from the preceding two years.

One of the most sought-after reggae LPs ever to see , the album finally receives the respect it has long since been due, with the original 12 tracks bolstered by an equal number of bonus recordings; the result being the first definitive anthology of the Kingstonians’ works for Harriott’s widely revered Crystal Records. Featuring a number of tracks new to CD and eight highly sought-after instrumental versions, “Sufferer” is a must for all serious fans of vintage Jamaican sounds.