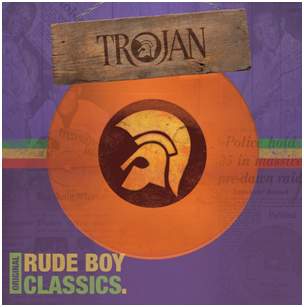 During the scorching Jamaican summer of 1966, widespread dissatisfaction over the failure of the island’s government to address social problems ultimately resulted in a sea of violence in and around Kingston.

As the perpetrators of the unrest, regarded by the authorities as ‘rude boys’ or hooligans, battled with the authorities for control of the streets, their activities became the subject of numerous recordings by a variety of local acts, with popularity of the discs on the island lasting well beyond the period of mass civil unrest.

Featured here are a dozen of the best-known ‘rude boy’ tracks, recorded from late ‘66 to early ’67, this essential collection in Trojan’s genre-themed series is pressed on high quality vinyl housed in a handsomely designed sleeve that conveys an authentic yet contemporary feel.

SIDE ONE:
1. Don't Be A Rude Boy - The Rulers
2. Soldiers Take Over - The Rio Grandes
3. Denham Town - Winston & George
4. No Good Rudie - Justin Hinds & The Dominoes
5. Rudie Gets Plenty - The Spanishtonians
6. Cry Tough - Alton Ellis & The Flames